Some time ago I read a piece in the Guardian online titled "How to cook the perfect sausage" which sort of answered a question that I've been asking myself recently, whether actually frying, grilling, poaching or baking sausages is the best approach and gets superior results.

The article's conclusion was somewhat loose, but suggested frying was best. However we've sampled a few sausages lately and had serious sausage rupturing happen on a few examples when pan frying. Same pan, same oil type, same temperature, same rupturing, so is there a better way.

The particular Guardian article also covered all about whether to prick sausages before cooking but we'll park that for now and concentrate on the cooking processes. As I recall the author did a test in cooking a couple of sausages by each method comparing results, which intent is to try myself.

Frying method, straightforward enough. Grilling (broiling if you're non-UK) same. Poaching? In terms of clarifying what is meant here this is perhaps a double-cook technique that Heston Blumenthal would evidently be proud of. Poaching sausages in 65° C water for 20 minutes, then frying them off in a hot pan. Not quite "sous vide" as it will be without the vacuum bag! Baking (roasting) in the oven, for approx 20-25 minutes at pre-heated 180° C / Gas 4.

So with a pack of decent "everyday sausages", AKA Priors Hall Farm - Traditional Porks, let me in the kitchen, I may be some time...


Observations and results then.... 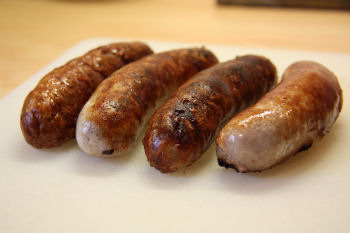 
BAKING: Roasting really and this isn't rocket science so as per the above. Quite a bit of run off of fat in to the dish. The taste was drier and the bite, well you could feel a slight bagginess. The skins though noticeably toughened, wrinkled up (no splits) and the weight loss the highest of all the methods was 26% (see table below).

POACHING: OK this is not just poaching as it involved frying off at the end in a hot pan, and the results were interesting as the skins were less tough than the BAKE and the GRILL but the sausage was very moist and succulent. Noticeable was a small number of oil droplets in the water that will have been released from the sausage and when drained there was a definite "paleness". When fried off though, the colouring changed dramatically. No splits. Weight loss 8%.

GRILLING: This is broiling for non-UK peeps. I see that "heat from above" = Broiling, and "heat from beneath" = Grilling. So as I'm in the UK, I bunged it under the grill! The skin toughened, with a minor split, the bite was firmer and the taste became sharper. Quite a bit of run off of fat in to the grill pan. Weight loss 18%.

FRYING: Using our normal sampling method results were much the same as when we tested these sausages in May 2012. Good taste and medium bite/soft(ish) skin. Minor split. Weight loss 9%.

So what's the preference? Well the POACHING method did produce a really succulent result with similar weight loss to frying, no splits or ruptures but the extra "work" and saucepan/thermometer time was a pain. If you've got the time Sausage Review can confirm that this method works.

Let's face it though, FRYING for us when doing our sampling is still the most effective, splits and all, but each to their own I suppose...