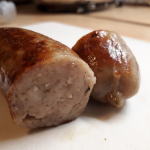 Fuller's sausages have always been good eating, and since 2019 they continue the same under a business rebrand to Meat & Cleaver...

Fuller's had their original premises in Sheering and moved to Brett's Farm just before our last review. Since then second generation butcher Sam Fuller has taken over running the business and continues to produce the Sheering Sausage and further develop the business.  Brett's Farm is on the A1060 at White Roding, Essex.

We needed some garden gas for the BBQ, so with travelling being a bit difficult at present I opted to go just up the road to Brett's. The butchery was open, so as I was there...

The Sheering Sausage has a mild peppery cumberland flavour made with min 65% (I suspect the figure is higher than this in reality) locally sourced pork, rusk and spices all loaded in to natural skins.

Texture-wise we'd say just under medium when cooked up, with a noticeable succulence, good bite and nice chew.  The natural skins are very good too and cook up well.  No splits (or bursts) or eruptions.  Absolute minimal residual oil left in the pan and certainly none of that pale ooze we see sometimes from other producers.

The quality of these Sheering Sausages we thought were very consistent with our previous sampling in 2016 and remain really very good.  I prefer a sausage like these that you can cut on your plate without it tearing ridiculously and leaving untidy sausage bits. No shrinkage and too little to worry about weight lost.

The somewhat reduced contingent here at SR HQ liked them very much and at £3.55 for a pack of six, they're still good value.

Would we buy some again?  There's no need to ask. Too right we will! 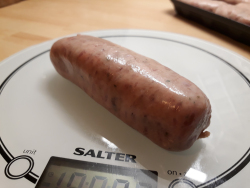 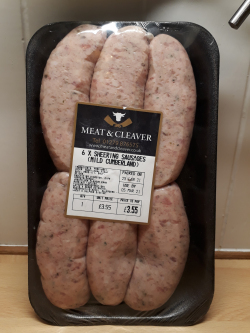