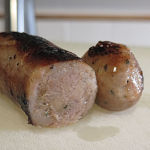 Buying these immediately prompted a "whatever have you bought those for" from my wife at the checkout!  There is, I suppose, the belief that the maple syrup will make them wildly sweet and spoil the taste of perfectly good sausages?  I too was sort of sceptical that this combo would work well, but put them through anyway...

The conversation briefly continued about the sausages in the car on the way back to Sausage HQ along the lines that you have venison with a berry compote, duck with orange or cherry, pork and apple, so what's wrong with pork and maple syrup?  So onward 24 hours...

These finest sausages from Tesco are 65% British pork with 15% British smoked bacon, breadcrumbs, and 3% maple syrup...there's also an undisclosed amount of honey and American style mustard.  Hmm?  Maple syrup AND honey?  As it happens on opening the packet, yes a very smoky sweet aroma was experienced, which increased in intensity when they were cooking.

The skins worked well and browned nicely.  The sausages did fatten up a touch though which we wasn't expecting and we did get quite a bit of sticky residue that held on the sides of the sausages.  This we suspect would have been meat juices with the maple syrup which had caramelised.  A bit of a scrape with the old spatula got most off quite easily though.

Texture-wise the meat was on the smooth-side, but there was a still reasonable bite.  The chew was a bit soft as the sausages did hold quite a succulence.  Taste-wise though the maple syrup, honey and mustard did work OK.  The smokiness of the bacon did help though.  I was genuinely surprised.

We ate them as part of a sausage and mash, which on reflection wasn't a good decision as we felt these sausages may have worked better with chips and a bit of salad, or just in a long roll BBQ style.

Not a bad sausage as it happens, which we would probably buy again in due course. 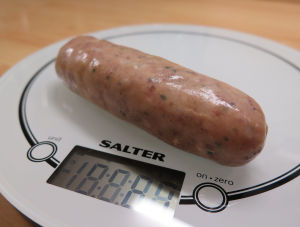 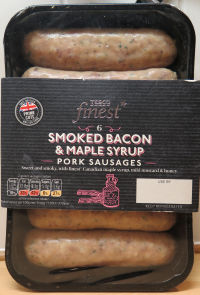