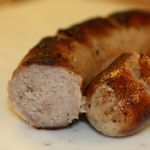 Jason Drage made up some brats for an "Octoberfest" event at a local pub recently and we managed to bag a few so the troops here could try them!

Interesting sausages.  Good quality pork, in natural skins. We bought them as "uncooked" knowing that we would need to prepare them properly, but from most suppliers / supermarkets you'll probably get these as "pre-cooked". (See our editorial on "brats")

Uncooked "brats" are normally steamed (or pan simmered in water) to prepare them and then they are chilled ready for use. Frying them off in a hot pan or under/over a grill to give them colour before serving is what we did. (Cooking them by grilling or pan frying, without pre-cooking is a skill, as burning the outside and the inside remaining under cooked or raw is very likely. Not good.)

The Churchgate Bratwurst ate very well I hasten to add, even if they are "foreign sausages"!  We tried them with mash and onions, although the purists would say that they would have tasted better in a bread roll with a dollop of German mustard!  They're very "porky" with a smooth texture and have a firm bite and good chew.

Ok we will admit that although these were excellently made, there's no comparison really with Jason's "British" sausages as far as we are concerned.  Really worth a try though if Jason has some on again, especially as a barbeque offering no doubt... 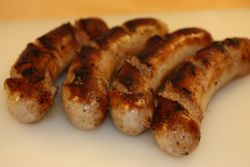