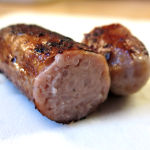 I dare say many are aware of Musks sausages from Newmarket, after all they do have a "Royal Warrant" so those from the "big house" must have heard about them too...

We don't need to go for "gluten free" normally as a family if totally honest but a few readers have asked recently about our views on such sausages, so not wanting to disappoint here's our spin on Musks 75% pork gluten free porkers.

You'll find them in the green coloured Musks card cover in the display no doubt.  You'll also notice a "Dairy Free" tag which perhaps will be of interest to those who need to be aware of such, however comparing the ingredients to a standard pack of Musks I'm not sure what this refers to?  The six sausages in a 384g pack do look pretty good though in the raw with good colouring and nicely filled very good natural skins. They say they are made in small batches, which is nice to know.

To remove the gluten, the recipe utilises cooked rice to replace the bread element in the regular mix. The texture as it happens is pretty good, but did appear slightly more "chunky" than I was expecting.  Fair succulence was noticed, and the taste was OK.  Having previously tried the regular Newmarket ones I'm sure I wouldn't be able to tell the difference from the taste alone.

Musks sausages do cook up well and perform well pan cooked.  We do tend to cook this way at home rather than grill as we find sausages in general do dry slightly more so than pan frying, however whichever way you choose, either to fry, grill or oven bake, all methods do work OK with these.  BTW: Although Musks provide no indication on the card cover, barbequing does work, but we've seen best results to pan fry initially then move them to the BBQ grill to finish.

OK we did note quite a bit of weight loss but shrinkage was acceptable.  The bite and chew were pretty good.

In a sandwich they were excellent...but then again, oops! that's making them NOT gluten free!  Oh dear...

We did like these and even though we don't need Gluten Free for dietary reasons as a family, we would probably buy these again. 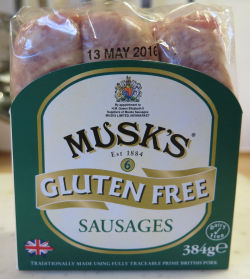 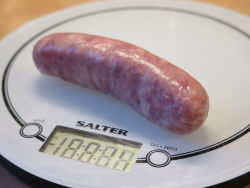