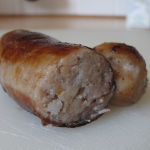 What, pork sausages with real Aspall cyder? Now that sounds interesting! I like cider or even cyder, but personally I'm not big on pork and apple, but I'd give it a go...

65% prime British pork with freshly baked bread, 6% diced apple and 3% Aspall cyder.  Come on, you're hardly going to get drunk on that amount, but what an aroma on opening the packaging. Very nice!  So much so, one of the troops caught a whiff and was straight into the kitchen to find out what was on. Whether Musk's using Aspall cyder from Suffolk rather than anything else is perhaps debatable, however creating an "Aspall sausage" with an implied Suffolk regional twist, is a good marketing angle agreed.

In the pan with the heat on the aroma was excellent. The skins although quite fine in appearance, browned nicely and held well with no major splits. A little leakage was noted though, as the skins tightened, which was probably the apple content cooking off, which began caramelising with even more aroma!

Texture-wise just above medium with a slight crumble which was very pleasing. Quite a good level of succulence which is likely achieved with the bread content rather than using rusk. Taste-wise I will admit to being initially concerned about the amount of apple in the mix with the cyder on top and the inevitable sweetness, but, the balance was very good.

A good tasty sausage. Not sure about use in a sausage and mash for me though, but we'll no doubt give it a go in due course and we'll report back...

Certainly a sausage with a difference and would really be worth a try!! 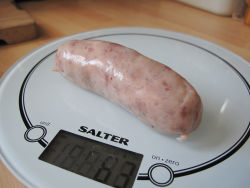 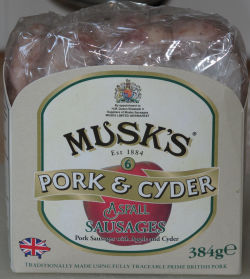