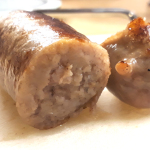 With travel restrictions still with us for now, to get our sausage fix in the week we had to fall back on some sausages from the freezer this time...mind you Musks - Original Newmarket sausages do make a first class "sausage & mash"...

We last sampled the "Original Newmarket" in June 2016 after we had a call from Musks thanking us for our previous review but informing us that it was from some time ago and would we really should consider publishing a more up to date one.

The recipe created by James Musk in 1884 remains as 75% fully traceable prime pork from British pigs, still containing locally baked bread and a secret blend of spices in natural skins.  Musk’s Newmarket sausages are traditionally made, and are renowned for their succulence.

In our earlier reviews the skins did always seem very fine, but this time we noticed they were just tad thicker, not by a lot though, but when cooked up did provide more of a substantial casing. No complaints as such but the thicker skins did raise a comment from the troops that the sausages seemed a little "chewier".  Yes the skins were firmer, but they cooked up very well, they cut nicely, and whilst cooking there were no splits or bursts at all this time.

In our last review we wrote - "Previously we did have a few sausages split when even sizzling them gently in the pan (the same as we do all of our tastings).  I know it's not a big issue but as some makers manage to produce sausages that don't split, it must be the production process of such that needs looking at".

Well there you go. I wonder if our last review was a useful reference then?

The meat content on the other hand was very consistent with a slightly coarse texture, and just on the edge of crumbly.  Certainly the bite was still good, and the taste just how it should be!  A light lingering spice and distinctive flavour as we've said before.  The succulence was still there too and all agreed here that the Original Newmarket was a very good sausage. Then again with Musk's still retaining their Royal Warrant since 1907, things should be good, shouldn't they!

An increase in our marking over the last review then.  We'll be buying some more for the freezer very soon! 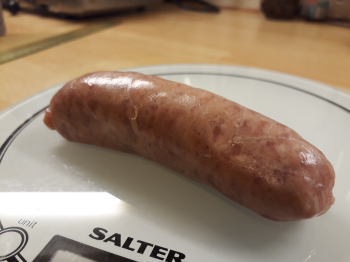 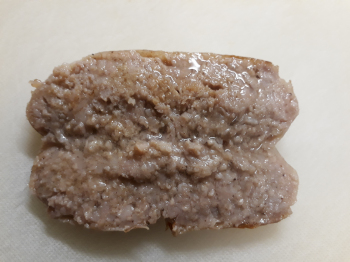 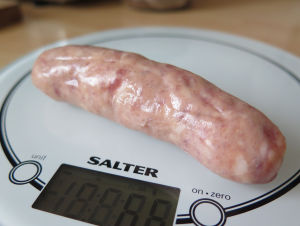 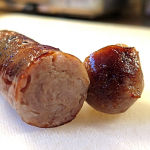 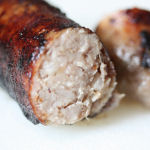 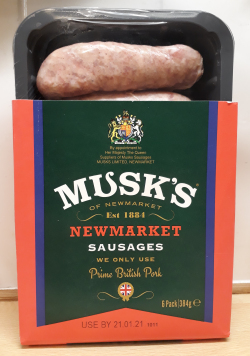