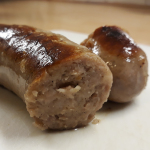 Why would you take a perfectly good flavoured plain sausage and put Doom Bar beer in it? A good question that has been posed by the troops. Well pork and ale is not that an unusual flavour to be honest, was my response...

The Churchgate Sausage Company of Old Harlow, Essex do produce and sell some particularly interesting examples of sausage delight using all sorts of ingredients and flavours.  Adding 10% Doom Bar ale in to the mix of some classic porks will no doubt raise some cheers from customers, and yet a few groans from others.

From my father-in-law's point of view, he really does like Doom Bar, so combining his other liking of sausage really does hit the mark, however those that don't have a liking for ale will differ in opinion.  The troops here didn't like them all that, just because of the beer flavour. A bit like the Marmite thing...you either love it or hate it!  Myself I found them a very OK sausage.  Well made as I would expect from Churchgate, and the quality ingredients that they use is very evident in their produce. Yes the beer flavour was as the troops put it, "in your face" but the sausage still had texture and ate much the same as the well respected Churchgate Classic Pork.

80% quality seasoned pork shoulder in natural skins provides the basis for these sausages with no doubt some of the liquid in the mix substituted for ale. 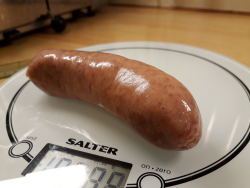